Fukushima Now Part 1: On the Eighth Spring Since the Accident –Living in a world full of contradictions

Report on Fukushima Prefectural People’s Rally
On March 17, 3,300 people participated in the “2018 A Fukushima Without Nukes! Prefectural People’s Rally” held at Tenjin Misaki, Naraha Town. Large numbers of people gathered from all over Japan to what was a designated evacuation zone until September 2015. This place was chosen from a feeling of wanting people all over the country to actually see the severe reality that has been brought about by the nuclear power station accident. But, as well as the location being inconvenient from the viewpoint of transportation, I also heard that some people were opposed to this location because it could be seen as supporting the government stance of trying to show that ‘restoration’ is proceeding smoothly and people should move back to their homes. The air dose rate on the extensive lawn at the venue, while it differed from place to place, was 0.09-0.13 microSievert/hour, which is not a value to be lightly dismissed.
Following the Executive Committee Chairperson Masashi Tsunoda’s greeting, Mr. Satoshi Kamata said he felt depressed by the difficulties facing the people of Fukushima and frustrated by the inability to topple the government that is still trying to push nuclear power. Ms. Ruiko Muto expressed her sentiment that living in the world after the nuclear accident was to live in a world without human rights and filled with contradictions and that she would like to live with sincerity that would connect up with the life we would live in the future. Ms. Harue Sanpei, a former resident of Tsushima District, Namie Town, is a plaintiff in the “Give us Back Our Hometown – Tsushima People displaced by the Nuclear Power Station Lawsuit” spoke of her heartache at having her ten-member, four-generation family being torn apart. Representing the young generation, two high school peace ambassadors, now in their 20s, declared their determination to spread the message of the realization of the abolition of nuclear weapons and a steady movement toward peace. 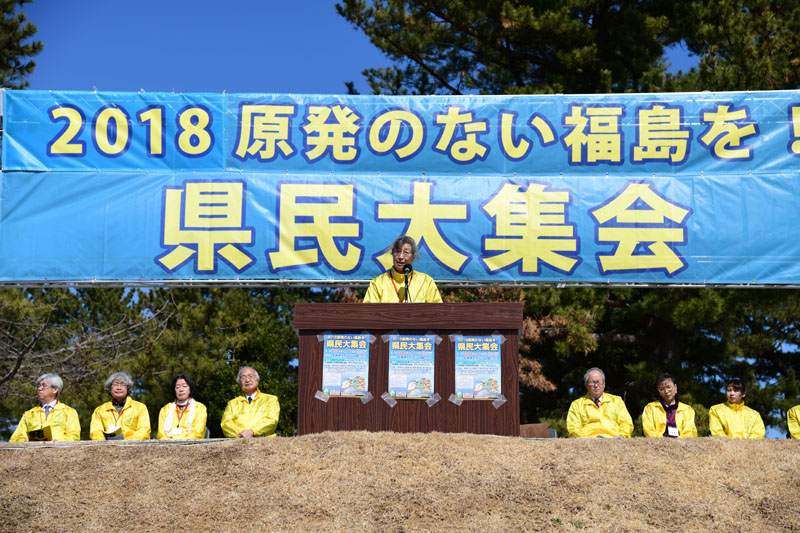 Lest we Forget
In February, I heard a report on the situation regarding Fukushima Prefecture’s radiation education at a nation-wide meeting on educational research. In a sixth grade class, the topic of “cancer” was taken up as an example of how radiation can impact the human body. Knowing that there is a fear that cancer will lead to death, it was said that in consideration for “school children whose anxieties about radiation are fading” the “children who feel worried” should be told that there was no reason for them to be over-concerned. This resulted in a ‘difficult’ attempt at a class where I felt the teachers should have been more aware of the contradictions involved.
According to the results of a questionnaire conducted before the class, 60% of children responded “I don’t know why there is a lot of radiation in Fukushima” and 40% responded “There’s nothing in particular that I want to learn about radiation.” 80% responded that “Regarding caution about radiation, I’m not concerned about it/I’m not concerned about it at all”. At the time of the disaster, these students were five-year-olds at kindergarten. They may remember something, but probably no one has continued to talk to them about it. The report concluded that we will now have to teach this properly as history.
A Place to Talk Things over Freely
“We want to prevent additional exposure to children; in the first place, how much radiation were they exposed to at the time of the accident?” This is what I was told when I had an opportunity to listen to mothers who are active in Iwaki City. “Because the plume containing massive amounts of radioactive iodine, that was released into the environment by the nuclear accident, passed over Iwaki City, the people there are at a high risk of thyroid cancer and other problems. Quite surprisingly, however, this is not well known by the citizens here.” This is from a group of mothers who have a testing lab and instruments for measuring the air dose rate and the concentration of radiation in the soil. They know the figures for radiation levels, they speak out and are concerned about countermeasures.
“What is disturbing is that the higher-ups at school and in the administration are saying that there’s no problem about the impacts of radiation and don’t rock the boat. In society, the men tend to fall into ‘business-as-usual’ mode, but as mothers we find it impossible to suppress the never-ending anxiety about our children’s future. Above all, we want a place where we can freely talk about our concerns. A place where we can thoroughly talk through the problems we are not happy about, and we want experts who will explain things to us in terms we can easily understand.”
“Since we live in a system where experts in the field are ‘guaranteed’ to tell us the truth, we end up trusting them. But the experiences of 3/11 showed us that this attitude was a mistake. We shouldn’t have left things in other people’s hands. What we are saying about ‘the freedoms and rights guaranteed to the people shall be maintained by the constant endeavor of the people’ is stated in Article 12 of the Japanese Constitution, but it seems our awareness of this was extremely deficient.”
<Yukio Yamaguchi, CNIC Co-Director>