Anti-Nuke Who’s Who Kiyohiko Yamada: Opposing the Nuclear Fuel Cycle as a Politician and Citizen Nuke Info Tokyo No. 139 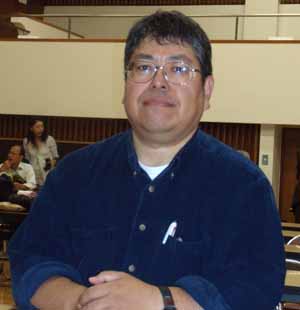 Kiyohiko Yamada was born and bred in Misawa City in eastern Aomori Prefecture. Misawa is home to a large US air base and is also the entry point to the Shimokita Peninsula, on which are located the nuclear fuel cycle facilities around Rokkasho Village and the sites of an existing nuclear power plant in Higashidori Village and a planned nuclear power plant in Ohma Town.Yamada became involved in the campaign against Japan’s nuclear fuel cycle policy when he attended a workshop in 1987. His opposition to the Rokkasho Reprocessing Plant eventually led him to stand as a candidate for the Social Democratic Party for a seat on the Misawa City Local Assembly. He was elected in 2004 and served on the Assembly from May 2004 to March 2008.

Because Misawa City borders Rokkasho Village, Misawa has signed a safety agreement with Japan Nuclear Fuel Ltd, owner and operator of the nuclear fuel cycle facilities, including the Rokkasho Reprocessing Plant. This gives Misawa City a say in relation to the safety of these facilities. Yamada hoped that by serving on the municipal assembly he would be able to use the leverage of the safety agreement to influence the debate about the nuclear fuel cycle facilities. However, there were few other assembly members who opposed the facilities and the local government toed the line of official central government policy. Yamada was disappointed that he wasn’t able to use his platform as an assembly member to put a brake on the construction of the Rokkasho Reprocessing Plant.

But he is not a man to give up easily. Since finishing his term as an assembly member, he has continued to play an active role in the grass roots campaign against the nuclear fuel cycle.

Through his long experience campaigning against Japan’s nuclear energy policy he has learnt the great importance of standing up to the government, in particular in the courts, in order to expose the government’s mistakes. The government’s nuclear policy is clearly mistaken and he is determined to do whatever he can to correct it. He has dedicated himself to this task as office manager of the 10,000 Plaintiffs Against the Nuclear Fuel Cycle group.

A particularly meaningful action that he was involved in was releasing post cards into the sea near the effluent pipe from the Rokkasho Reprocessing Plant. Radioactive waste is released from the pipe into the Pacific Ocean. By tracing where the ocean currents carried the post cards, it was possible to construct a concrete, easy to communicate picture of where the radioactive waste resulting from reprocessing would end up (refer NIT 108). Citizens tried a similar experiment to estimate the dispersion of radioactive gas from the exhaust stack. They released balloons, but unfortunately were unable to trace them after they were blown by the wind in the direction of the Tsugaru Strait.

The commencement of commercial operations at the Rokkasho Reprocessing Plant has been delayed by a further two years (see NIT 138). Yamada hopes to use this time to explain to the public in simple terms the impact of the radioactivity released as a result of reprocessing and to increase the number of people opposed to the plant. His immediate aim is to have the plant shut down permanently, but his vision goes far beyond that.

The plant has already been contaminated as a result of active testing, which started in 2006. Even if the plant is shut down now it will take decades to clean up. Yamada is already focusing on the need to put in place a system for the protection of workers and the public during what will inevitably be a difficult and protracted decommissioning process.

*Philip White is the editor of Nuke Info Tokyo.