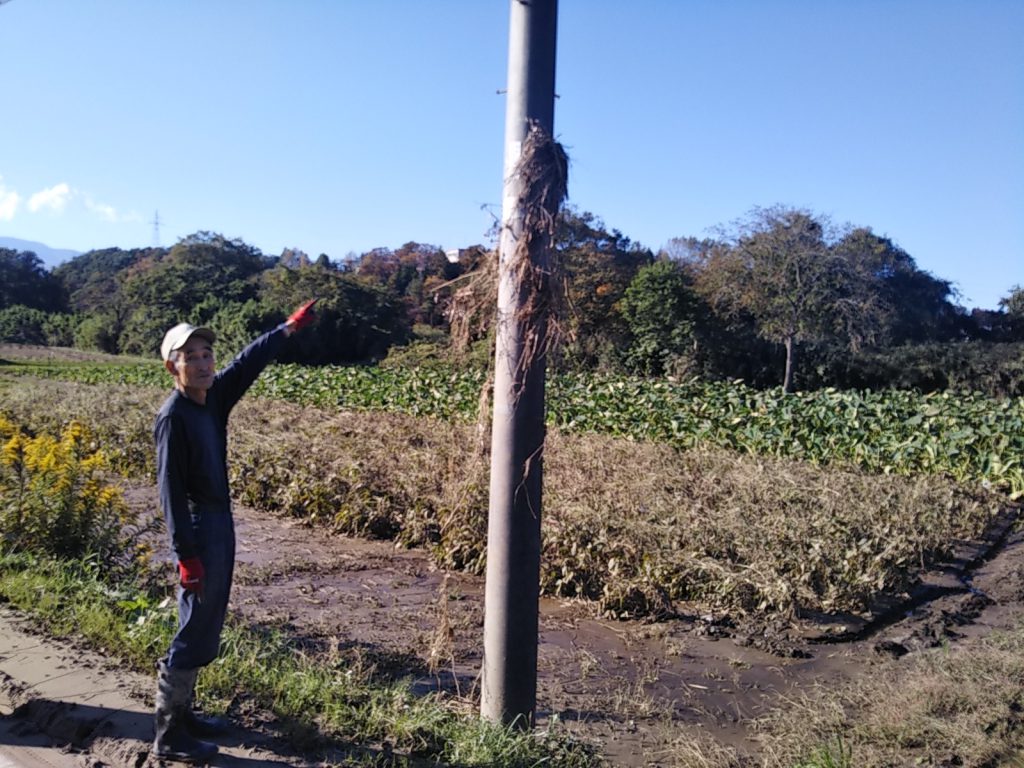 Abukuma River flooded to well above the height of this man in Nihonmatsu, Fukushima Prefecture

Typhoon Hagibis struck Japan on October 12, 2019, wreaking enormous damage across the nation. Fukushima Prefecture was particularly hard hit, where damage from the overflowing and collapse of embankments of the Abukuma River and its tributaries caused 32 fatalities with 1,463 homes totally destroyed and 12,333 partially damaged (Fukushima Pref. survey, as of Jan. 7). In addition, rice awaiting harvest and other crops were swept away, bringing agricultural damage to crops, trees, facilities, livestock, etc. to about 1.618 billion yen, and damage to fisheries to about 81 million yen. Many landslides also occurred, especially in mountainous areas. Damage to agricultural and other property from the disaster (irrigation ditches, ponds, etc.) came to about 15.44 billion yen, damage to forestry and forest conservation facilities (forested land, forestry roads and facilities, the forests themselves, etc.) came to about 5.761 billion yen, providing a glimpse of the severity of damage from this storm, which broke short-duration heavy rainfall records. The October 29, 2019 Nikkei Shimbun (newspaper) reported damage of 22.9 billion yen to agriculture, forestry and fisheries in Fukushima Prefecture

Meanwhile, contamination from radioactive substances released from Tokyo Electric Power Co.’s Fukushima Daiichi Nuclear Power Station over broad regions of Fukushima and its neighboring prefectures has been confirmed. Outflow of these contaminated soils has occurred as a result of the heavy rain, causing concerns about recontamination in various places. The November 18, 2019 edition of Tokyo Shimbun devoted much space to reports of recontamination.

Herewith, I present the results of gamma ray spectrometry performed on soil samples collected in various parts of Fukushima and details of the joint investigation I conducted with Tokyo Shimbun.

Samples Brought in by Citizens

I began taking part in a serious investigation of this after citizens of Nihonmatsu City, where I head a team of radiation specialists, brought in soil samples. Nihonmatsu is located midway between the cities of Fukushima and Koriyama. It is an old castle town that grew up around Nihonmatsu Castle, and has a current population of 54,285 (as of Dec. 1, 2019). Running through the heart of the city is the Abukuma River. It is also where artist Takamura Chieko, wife of the poet Takamura Kotaro, was born.

The soil that was brought in was composed of clay in the form of a paste that had accumulated in river pools at bends in the Abukuma River. Results of a simple investigation of samples still containing water revealed radioactive concentrations of 170 to 200 Bq/kg. Later, once the waters had receded from the fields, I began conducting a serious investigation jointly with Tokyo Shimbun, guided to various locations by landowners and hearing them describe the state of flooding that had occurred. According to an investigation by Nihonmatsu City, the flooding had reached 6.6 meters at its peak.

The survey was accomplished using a vertical sampling method called “core sampling.” The soil consisted of a sedimentary layer of clay carried in by the flood over a layer that had been in use since the time of the nuclear accident, which had been mixed to a depth of 15 cm by tilling because it was farmland. Further below that was a layer to which radioactive substances had penetrated, and below that were layers remaining as they had been prior to the nuclear accident. Sampling extended to that depth for comparative evaluation and was thus conducted from the surface to a depth of 60 cm. When the depth of the sedimentary layer was investigated prior to taking core samples, it was found to be 15 cm. The sampled soil was cut at 5 cm intervals and dried, after which the radioactive concentration was determined through gamma-ray spectrometry using a germanium semiconductor detector. The results showed the sedimentary layer to have maximum radioactivity of 1,536 Bq/kg, the layer contaminated after the nuclear accident, 3,701 Bq/kg, and the layer unaffected by contamination from the nuclear accident, 9.6 Bq/kg (see Table 1 for details).

Motomiya City is mentioned as an area that received great damage from this typhoon. Motomiya is adjacent to Nihonmatsu, and its urban area similarly arose on the banks of the Abukuma River. We used a vacuum cleaner there, sweeping areas measuring 1.5 m by 1.0 m to collect samples of sediment that had been deposited in a garden attached to housing in a densely packed residential area that had been inundated, and dust that had been deposited on the asphalt of the Motomiya-shi Central Community Center parking lot. These were evaluated by gamma-ray spectrometry. The results showed the soil, consisting of clay, and sand to have a level of 1,470.1 Bq/kg, and the dust, a level of 752.8 Bq/kg. The results were found to match the radioactive concentrations found in the farmland samples in Nihonmatsu quite closely.

Water damage caused by the heavy rain has led to concerns about recontamination due to contaminated soils being swept in from rivers. We found that in farmlands there may be higher levels of contamination in the original soils that were previously contaminated than in the newly deposited soil. However, the levels of contamination are far higher in either of these soils than the radioactive concentration levels of 8 to 9 Bq/kg that were present before the nuclear accident, so caution is naturally necessary. There is only slight transference of radioactive substances from contaminated soils into crops, and investigations thus far have not found levels that would have an effect on human health, so care must be taken not to start rumors that might take on a life of their own and damage reputations. In urban areas, however, things are different. Contaminated sediment was swept into areas that have been cleaned using high-pressure washing and exposure to wind and rain, and recontamination has been confirmed. As for volunteer work in areas with radioactive contamination like this, unlike in other disaster scenarios, one must not only take hygienic issues, such as norovirus, into account but also be careful not to breath in the dust.

I wish to express my gratitude to the people of Nihonmatsu and Motomiya for cooperating in this investigation. Though they do not appear in this report, I similarly wish to thank the people of Iwaki and Minamisoma. Finally, I express my cordial thanks to reporter Mr. Ohno Takashi of Tokyo Shimbun for wading through the mud with me to obtain samples for this investigation.