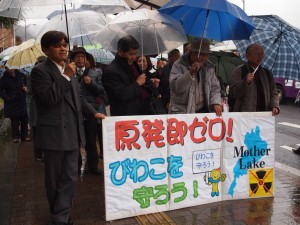 Anti-nuclear activists celebrate a victory as the Otsu District Court issues a provisional injunction, shutting down the Takahama 3 and 4 reactors, 9 March 2016
(Photo courtesy of the National Network of Counsels in Cases against Nuclear Power Plants)

Establishing a liaison for exports to China

As tremors in Kumamoto and Oita continue…

Suit filed to prohibit operation of Takahama reactors beyond 40 years

Fukushima Fishermen Opposed to Proposed Release of Tritium into Ocean